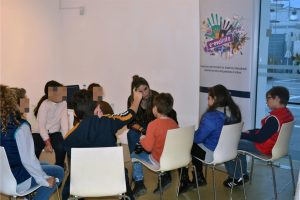 rding to Eurostat (2017) in 2016, 63 300 asylum seekers applying for international protection in the Member States of the European Union (EU) were considered to be unaccompanied minors. Of the largest shares of unaccompanied minors among all young asylum applicants in 2016 was recorded notably in Cyprus, among other EU countries, reaching 32% percent. In order to promote a dialogue to schools about this issue CARDET in the framework of the E-EVALINTO project conducted a workshop on the 13th of January, 2018 at Palia Ilektriki in Pafos for raising awareness on the life of unaccompanied minors living in reception centres.  During the workshop Primary School students had the opportunity to engage in a number of activities, discuss about the issue and reflect on their views and on what each of us can do at a personal level in order to support them.